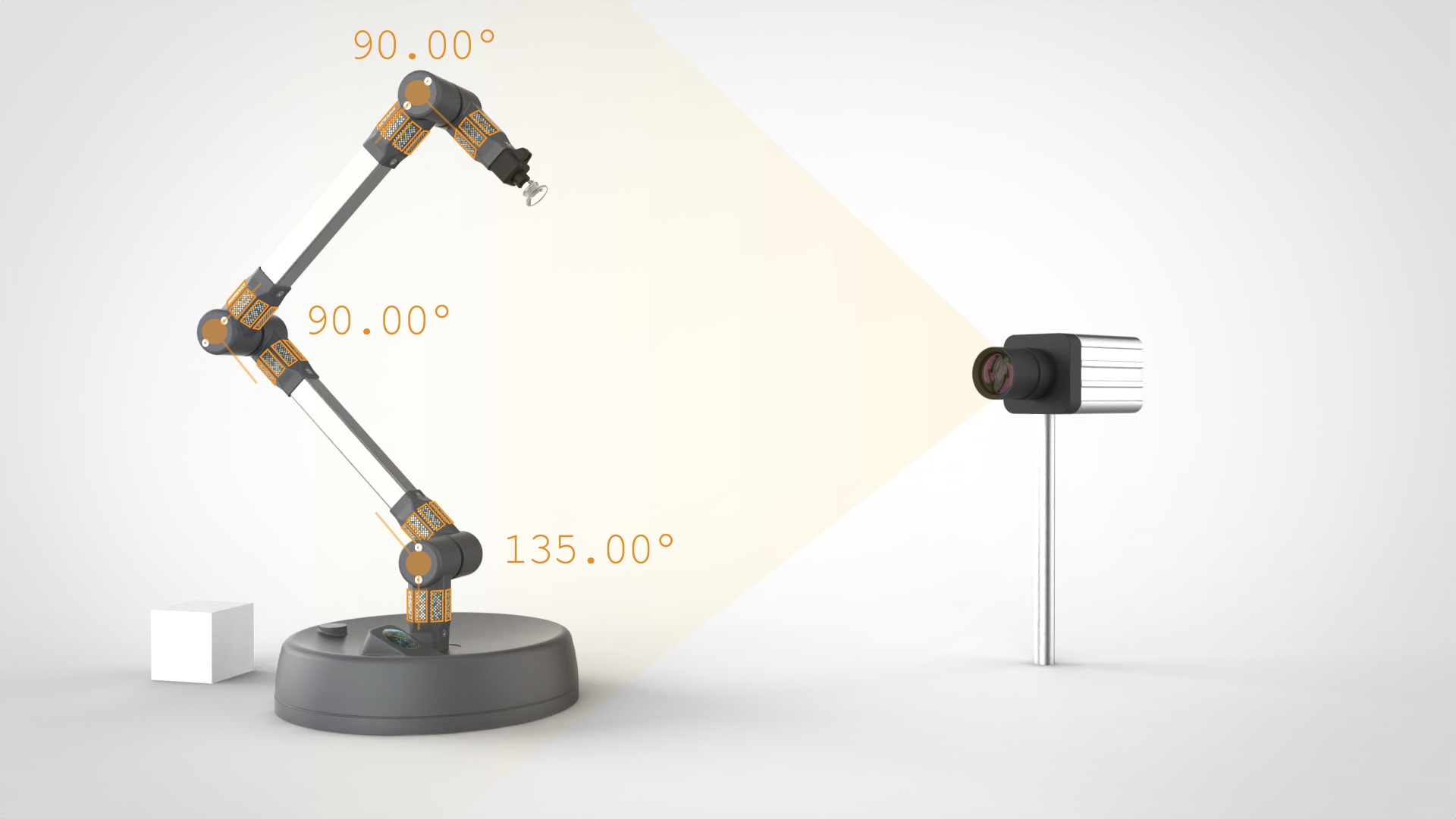 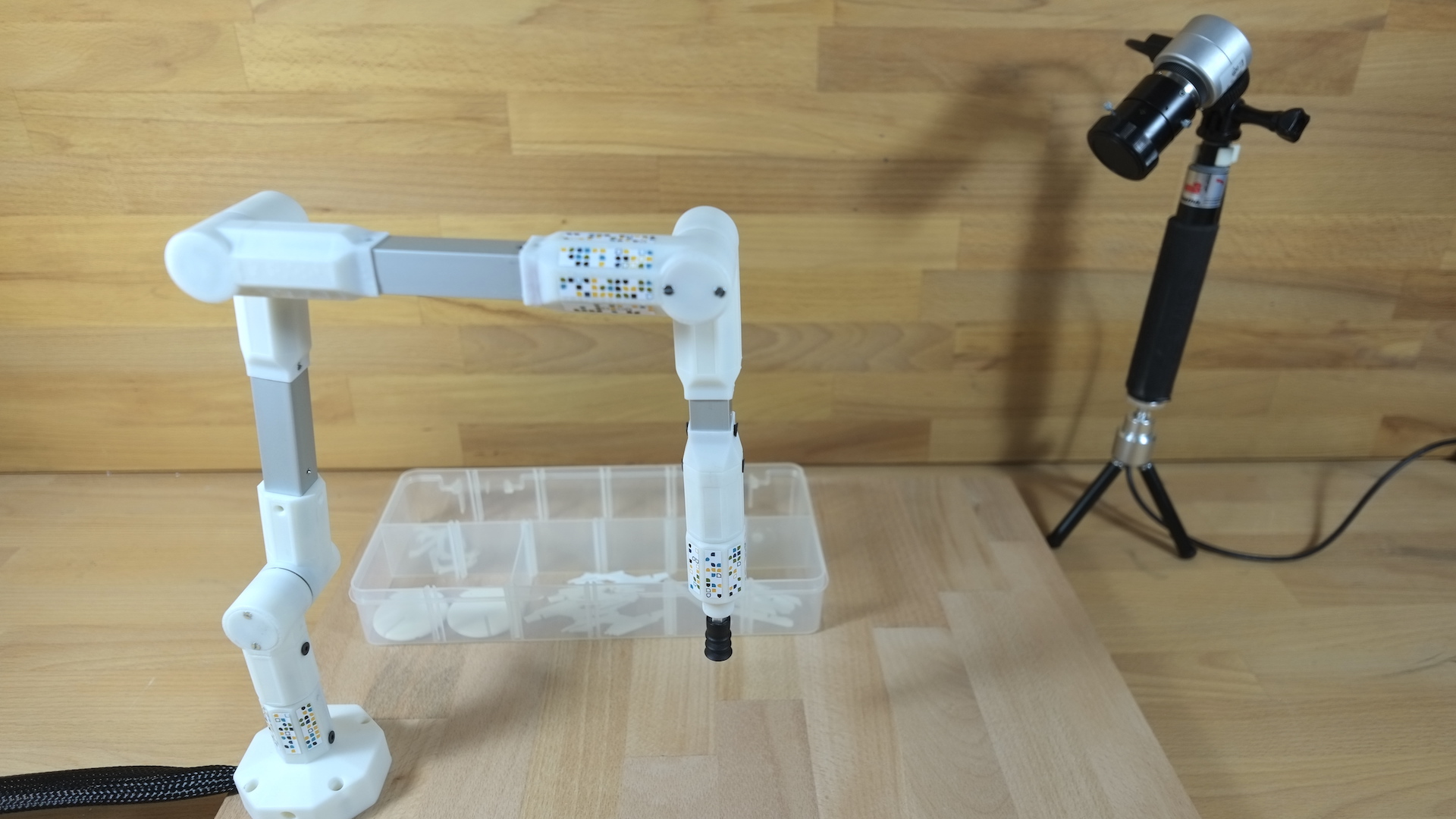 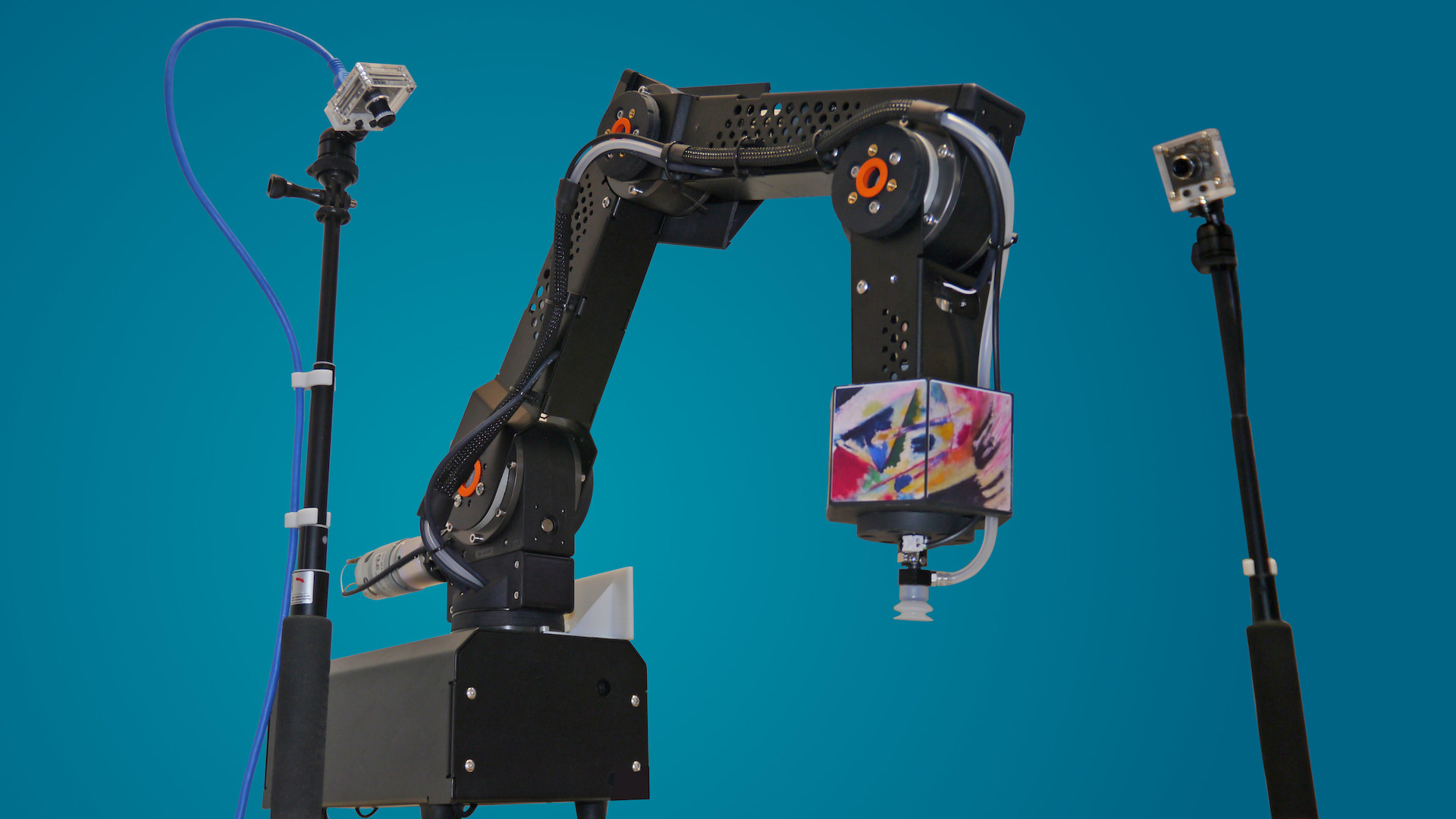 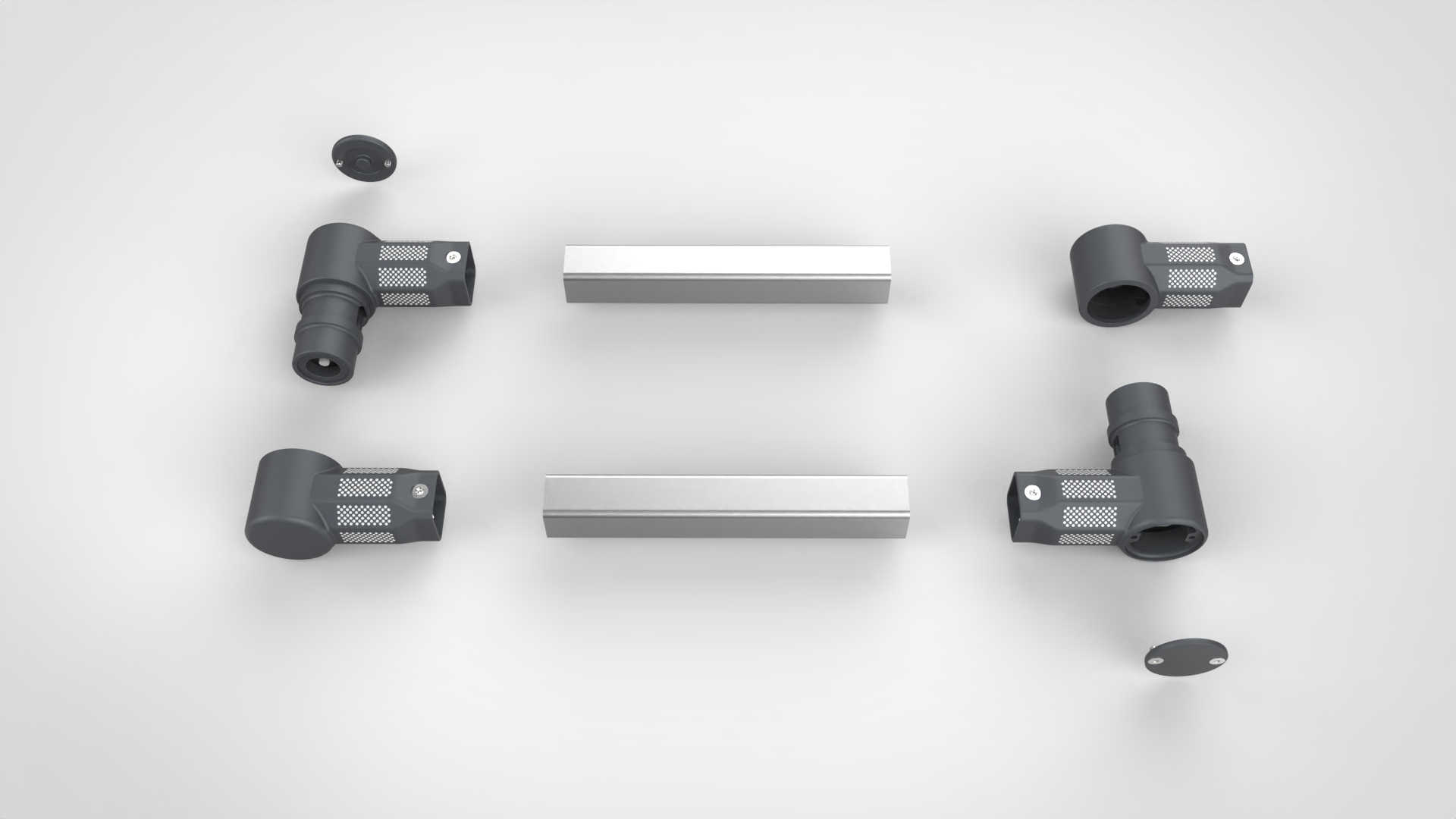 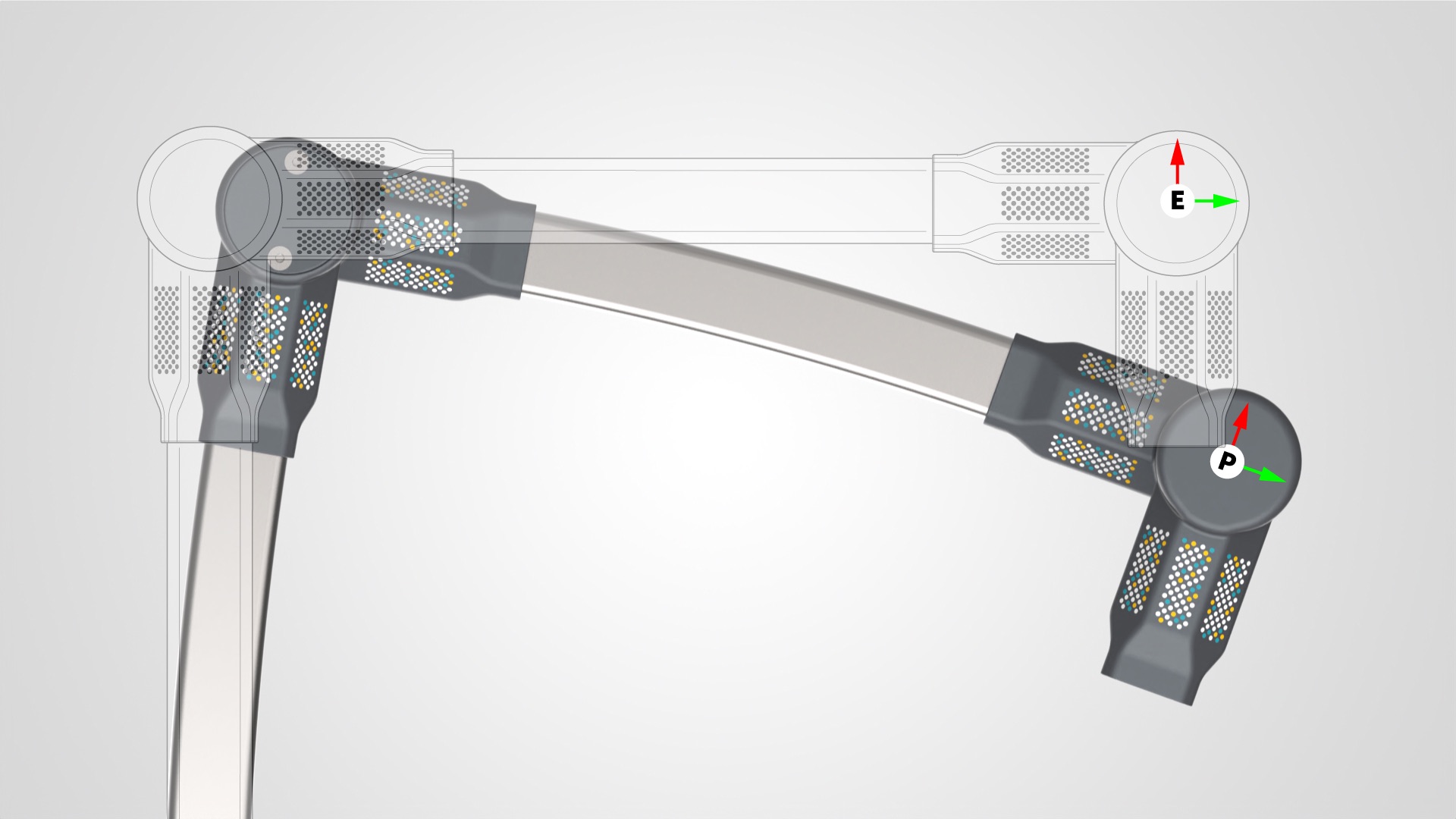 Camera-based encoders provide the true position (P) with gear backlash and deflection of links, instead of ideal positions (E)

ViseJoint is a virtual sensor based on computer vision software that measures angular positions of joints (virtual encoder). All axes of a robot arm are measured simply by looking at them with cameras. Positioning and control of robot arms works purely camera-based, even a robot arm without any hardware encoders is possible!

ViseJoint relies on one or several standard cameras next to the robot arm. Smart service robots already use cameras for navigation, pose estimation or object/face detection. Now, those existing cameras are co-used for angular sensing! All data derived from the camera is naturally coherent, ensuring minimal relative positioning errors.

Sorting, mounting and picking with a small desktop robot arm

Details An external, nearby or “eye-in-hand” camera observes the robot. This remote sensing approach avoids errors by decalibration and ensures results coherent with the outside world. Also, the camera is co-used for other tasks like object recognition and bin picking.

Details Sensor data are calculated virtually by a computer vision software, observing the robot with a camera. Electronic components and cabling required by standard hardware sensors are replaced with a software solution!

Details Camera-based sensing shifts hardware functionality to software, reducing the number of electronic sensors and their wiring. But there is more: External sensing captures the true state of the robot, including backlash and bending. Therefore, simplified and lighter mechanical components like gears and links can be used! 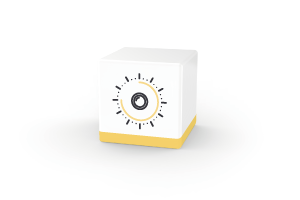 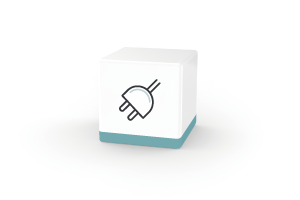 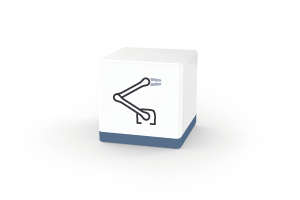 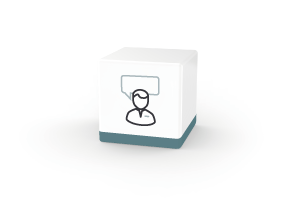 From concept to product: We support you with integration of camera-based arms on your robot 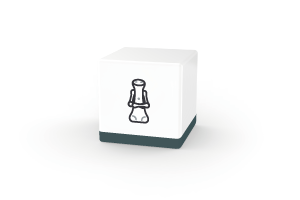 Demonstrator of camera-based robot arms according to your specification 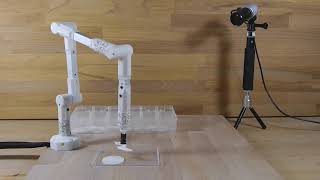 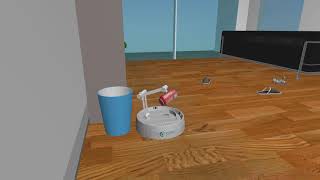 A concept for a next generation vacuum robot: The mobile platform features a sensorless robot arm solely controlled by cameras, which obtain joint positions from visual markers on the arm. 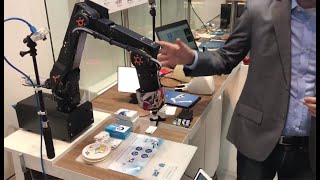 Interview and demo of a robot arm fully controlled by camera-based angular sensors. This demo on Hanover Fair shows a pick and place application on low-cost Igus hardware. By automotiveIT. 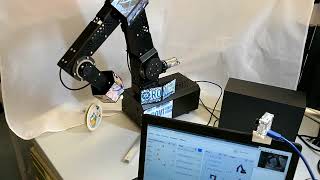 Fully camera-based sensing and control of a "sensorless" robot arm. This proof-of-concept uses Igus gears and has been presented on A3 business forum.

(1): Camera-based sensing can be configured in many ways, adapted to your needs. For instance, a higher camera resolution and a zoom lens improve accuracy. Above, you find typical values with mid-range industrial cameras.
(2): The limiting factor is pose estimation of the object. Robot pose estimation is typically more accurate.

Follow us for news about Visevi, robot vision and camera-based sensors:

We are located in the Hohe1 office building